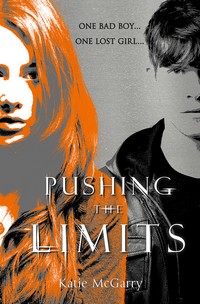 Pushing the Limits by Katie McGarry

SO WRONG FOR EACH OTHER…AND YET SO RIGHT.

No one knows what happened the night Echo Emerson went from popular girl with jock boyfriend to gossiped-about outsider with “freaky” scars on her arms. Even Echo can’t remember the whole truth of that horrible night. All she knows is that she wants everything to go back to normal.

But when Noah Hutchins–the smoking hot, girl-using loner in the black leather jacket–explodes into her life with his tough attitude and surprising understanding, Echo’s world shifts in ways she could never have imagined. They should have nothing in common. And with the secrets they both keep, being together is pretty much impossible.

Yet the crazy attraction between them refuses to go away. Echo has to ask herself just how far they can push the limits and what she’ll risk for the one guy who might teach her how to love again.

Sometimes you read a novel and you just know that you are reading something special – a novel with such beautiful characters and an amazing storyline that you know you will never forget it.  A novel where you become emotionally attached to the characters and you find yourself desperately turning the pages, eager to find out what will happen next.  A novel that you can only describe as utterly perfect.  That is how I feel about Pushing the Limits.

Pushing the Limits by Katie McGarry is one of my favourite reads of the year so far and my all time favourite contemporary novel.  I just loved it.

Told from alternating points of view, Pushing the Limits follows the story of Echo and Noah: two high school students, in their senior year, who are trying to cope with what life has thrown at them.  The reader is first introduced to Echo, and it is obvious after reading just the first few lines that Echo’s life is a mess.  Her father is controlling, wanting her to do better at school (even though she is an A student), she dislikes her step-mother, her brother passed away a few years earlier, and she suffered a terrible trauma resulting in both her arms being scarred.

Echo doesn’t remember what happened to her.  All she knows is that it involved her mother – a mother she is no longer allowed to see.  No-one will tell Echo what happened.  Her father would be happy for her not to remember, and her therapist feels that it is best if Echo remembers what happened to her herself and is not told.  Echo wants answers and is frustrated that she can’t unlock her own mind – to the night that her life changed.

I loved Echo; I thought she was such a beautiful character.  I give her major credit for just getting out of bed everyday.  With everything she has to deal with it would be so easy for her to give up and just let the darkness consume her, but everyday she tries.  It’s not the ‘trying’ that her so called friends want.  They are more interested in her social status than her feelings.  They want her to be the Echo that she used to be.  Echo only has one true friend who understands her and what she wants – what she craves.  Echo craves normal, and when Noah enters her life she isn’t sure whether he can offer her normal, but she also can’t resist him.

It did take me a little while to warm up to Noah.  At first, I thought he was just a jerk, but the more I read the more and more I understood him.  He puts on a tough guy persona, but under that exterior is a young man who is missing his parents who passed away in a fire and his two younger brothers who are living with a different foster family.  All Noah wants is to gain custody of his brothers and he needs Echo’s help to do so.  How?  I’m not going to say.  This story is so amazing that I just don’t want to give too much away.  By the end of the story I think I had developed a little crush on Noah.  I loved his loyalty to his family, how he would do anything for his brothers, and I loved the strength and courage that he gave to Echo.  The attraction between Echo and Noah is intense, magnetic, romantic, and so beautiful.

Noah and Echo are both facing such serious issues and author Katie McGarry does not shy away from these.  How Echo and Noah are feeling is not skimmed over, there is depth and emotion, and Katie McGarry writes it all with empathy, compassion and respect.  I loved how Noah and Echo found strength in each other.

Something else that I loved was the conversations between Noah and Echo.  Sometimes they were teasing, sometimes sarcastic, sometimes serious, and sometimes heart-breaking.  Noah was often sarcastic and Echo was right there with a come-back.

I fell in love with this novel and it is one that I will definitely read again.

Katie McGarry has written a very touching, absolutely beautiful, emotional and heartfelt novel, that features both heart-breaking and heart-warming moments.  With two amazing main characters and a storyline that pulls you in, Pushing the Limits is an unforgettable novel that I recommend to everyone who loves to read.

*Thank you to Harlequin Teen Australia for providing me with a copy of Pushing the Limits to review.

7 thoughts on “Review: Pushing the Limits”