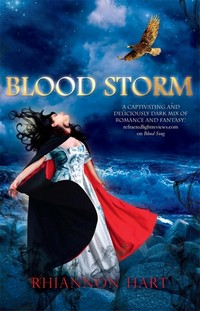 The rain wanted to be ocean; the ice in the mountain caps wanted freedom. I never knew that water held such longing. The clouds above my head rumbled like a growling wolf, impatient to release their burden. I held the rain there a moment longer. I turned to Renata, heard her gasp and knew my eyes glowed blue.

I spoke a single word. ‘Rain.’

In the Second Book of Lharmell, Zeraphina and Rodden must travel across the sea to find the elusive ingredients that will help them to win the coming battle against the Lharmellin – but shadows from Rodden’s dark past may come back to haunt him. And while she learns to harness her new abilities, Zeraphina still fights the hunger that makes her crave the north – not to mention avoiding her mother, who wants to see
her wayward daughter married to a prince at all costs.

Wow, what an absolutely amazing novel.  I could not put Blood Storm down.  With every turn of the page I was drawn deeper into the story.  It’s the perfect sequel to Blood Song.

I think one of the reasons why this book is so captivating is because of the main character, Zeraphina.  She is such a likeable character.  Zeraphina is funny, kind-hearted, loyal, brave, and has a great sarcastic wit.  The banter between Zeraphina and Rodden continues in Blood Storm, and with Zeraphina’s sarcastic wit and Rodden’s at times frustrating manner, some of the conversations between them are quite funny.

I loved Rodden in this novel.  There is so much that Zeraphina does not know about him – how he became a harming; his past.  I was as keen as Zeraphina was to learn more about him. When Rodden’s past is revealed it is both heart-breaking and terrifying.  Learning about Rodden’s past gives the reader a clear insight as to why he acts the way he does, why he seems to, at times, keep Zeraphina at a distance.

Zeraphina and Rodden face many obstacles in Blood Storm.  The harmings are regrouping and Zeraphina’s mother, Queen Renata, wants Zeraphina married as soon as possible.  The queen has found a potential suitor for Zeraphina in Prince Folsum.  He is absolutely vile, an awful man, and I felt so sorry for Zeraphina.  The last thing she wants is to marry him.  He is causing all sorts of problems for Zeraphina with accusations as well as threats towards Rodden, and when Prince Folsum’s sister becomes involved in the matter things become even worse.

One of my very favourite parts of the Lharmell novels are when Zeraphina, Rodden, and Zeraphina’s animal companions, Leap and Griffin, are all travelling together.  They make such a fantastic team; they work so wonderfully together.  I just love reading about them.  There is something very special about the four of them together.

There is so much suspense and action in Blood Storm, as well as several twists and turns including a shocking cliff-hanger.  I was in disbelief.  I found myself thinking no, no, no.  I have so many questions.  Will Zeraphina have to marry Prince Folsum?  I also have another question, but I can’t tell you what it is because it will spoil the ending if I do.  I’m sure once you have read the ending that you will be able to guess what my question is.  I can’t wait to read the next book in the series to see what happens next.

Blood Storm is one of those books that pull you into the story completely and you find yourself eagerly turning the pages, desperate to know what will happen next and how the characters’ stories will unfold.

*Thank you to Random House Australia for providing me with a copy of Blood Storm to review.